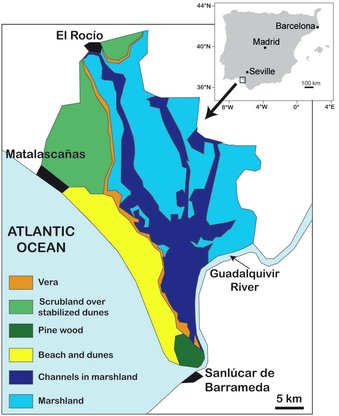 The fossil record constitutes our primary window to study life in the past and to infer episodes of faunal and floral change associated with past environmental shifts. Nevertheless, before obtaining evolutionary or environmental information from the fossil record, it is necessary to evaluate the taphonomic processes that have transformed information from living organisms to death remains and, eventually, to buried and fossilized remains.

Death-assemblage surveys in modern ecosystems are of particular interest because they document comprehensive information on the multiple processes affecting organic remains when an organism dies and controlling their eventual destruction or preservation. In the field of vertebrate taphonomy, the work by Johannes Weigelt (1927)[was one of the first studies dealing with the processes governing the decomposition and potential preservation of modern vertebrate carcasses. Nevertheless, long-term mammal bone surveys did not started until the 1970s with the work carried out by A.K. Behrensmeyer and others in Amboseli National Park. These studies have shown that carcass and bone surveys are not only useful to paleontologists but they also constitute a non-invasive and inexpensive way to monitor changes in living populations in areas lacking historical records and, therefore, they can provide interesting information to conservation biologists and wildlife managers.

The LiveDeadFossil project aims to start a new bone monitoring programme with two main objectives: (1) to document processes that modify modern skeletal remains and result in either their preservation or destruction and (2) to compare the faunal representation (fidelity) of the death assemblage to the one observed in the living community. Our bone surveys will be conducted in a Mediterranean ecosystem, which has not been studied yet from this viewpoint. Specifically, we will carry out our research in Doñana National Park, one of the largest natural reserves in Europe, UNESCO World Heritage Site and Biosphere Reserve, in a Mediterranean ecosystem in Andalusia (Southwest coast of Spain). Doñana National Park's vertebrate fauna is very diverse and includes fresh water and marine fishes, mammals, and reptiles as well as amphibians, and a highly diverse bird population.
The analysis of the death assemblages follows the protocol established by A.K. Behrensmeyer in Amboseli National Park and is based on the establishment of transects that are inspected on foot. Whenever a bone or carcass is found, it is marked and its taphonomic features are recorded. Interestingly, Doñana National Park is composed of varied habitats that differ according to their geomorphological location, i.e., scrubland developed over stabilized dunes, marshland, and an ecotone (called 'Vera') in the boundary between the aeolian sands and the marshes. In these landscapes, several depositional settings are recognized (e.g., river channels, floodplains, lake shores, dunes, and beaches). Therefore, this project will allow the description of post-mortem processes occurred in contexts with fossiliferous counterparts in the geological record as well as the assessment of the live-dead fidelity in different habitats.